You have written quite a few books- do you find it easy to be prolific or do you find yourself having to work hard on keeping up a certain output?

I have been writing for decades, however, the first story that ‘stuck’ was Gone, rather than throwing my efforts into the bin.

Gone was written in answer to a question after my daughter, Samantha, died because her heart stopped at the age of two and doctors brought her back only for her to be suffering severe brain damage – who she’d been had been wiped clean. Samantha ‘survived’ for seventeen years enduring terrible pain while not even knowing me or her previous existence, all her memories were gone. So then, the question that haunted me during those seventeen years until she died a second and final time: Where had she gone? Because her essence had vanished. Thus, the creation of Gone: into a world where I attempted to answer that question...Avalon.

Gone sees a mother dying and leaving her body where she meets her daughter (her essence, where she waited for her body to die, grown into a young woman and not like the twisted form left on Earth). It tackles a variety of issues including grief, guilt, loss, love, memories, existence and so many more. It’s a fantasy because I couldn’t think of any other way; after all, it was delving into the unknown.

It takes the mother on an epic journey, even a quest of discovery. I think it was a success, if somewhat controversial, especially for ‘believers’, of which I am not. It also includes humour due to the fact that life is irony and contradictory and particularly difficult, so we have to laugh.

It was after I wrote Gone that I found Lulu, a self-publishing site – no traditional publishers or literary agents were interested, as it was far too different from the ‘norm’ and I wasn’t famous.

After that, I wrote The Star Realm, the beginning of an adventure for a younger readership, as fantasy story using the world of Avalon – a place far too interesting to waste. It was fun to write but the story became so big that I had to divide into three: The Avalon Trilogy.

The mind has always fascinated me, particularly because of what had happened to Samantha, so I found various ways to explore it. Hence, Lost Shadows, Of Sound Mind, The Puzzling Brain of Martha Tidberry and some others that ventured in the crime thrillers, where I try to understand why people commit terrible acts. Dirty Business, A Murderer’s Heart and a few shorts veered that way.

The idea for Knowing Jack was sparked by my son, Daniel, because of his amazing intuition. I would agree that my stories are rooted in experience though it’s my imagination that usually sees them through.

Many stories and ideas came through dreams and I had to write them. Though it wasn’t until Samantha died the second and final time that I could write Slings & Arrows; a non-fictional account of that gruelling time.

To answer your question (at last), during many years it wasn’t difficult to continue to write, the ideas and ‘will’ continued to flow and ebooks (Kindle) made it even easier to publish. However, since the death of my husband, Trevor, last year, I haven’t been able to write. Strangely, the ideas are there but when I try to write, my brain becomes overwhelmed, making it impossible to create the new worlds.

Trevor came back into my life after over three decades; he was the love of my life but circumstances forced us apart. Nevertheless, we managed to have eleven years together. I know the term soul mate is cliché, but it felt true for us. I wrote a story called Changing Angels that was loosely based on our lives and I’m thankful Trevor was able to read it before he died. It’s a crime thriller, romance with a touch of fantasy.

So I suppose the answer is yes it was easy and no, now it’s not.

You write in a number of fantasy-related genres and for various age groups- what would you say is your favourite sub-genre, and also your favourite age group to write for?

I enjoy writing fantasy the most because it allows my imagination free rein. The paranormal is a fascinating area and I like to explore it; is it in the mind, do we conjure what we expect or is it real? The brain has such power and its potential is vast, who knows what it can do? I love ‘witchy /magic’ stories and exploring worlds written by other authors. Who knows for sure what is ‘real’? I like to keep an open mind.

I wrote the Weird series in diary form with a humorous slant, as it suited the ‘tongue-in-cheek’ vibe. The name Henry Ian Darling came to me in a dream.

Maisie, pure fantasy, is a spin-off from the novel Of Sound Mind; I suppose it’s really part two but could be a standalone. Some have called it YA but that wasn’t my intention since it tackles some tricky issues such as blindness and touches upon what happened to Jorja (Of Sound Mind). Maisie and Jorja are connected – to find out how, read the books! Their stories are also in an omnibus edition called, The Keys to Mageia. Touch of marketing there!

Writing for children is fun because I can be even more imaginative and ‘silly’ at times. People underestimate children, in my opinion, and I think it’s a shame when they are told to ‘grow up’ and ‘be real’.

I can’t give a favourite sub-genre because I love them all – wherever imagination can wander, where there are no limits.

How do you approach the marketing of your books? Any meticulous planning? Any particular strategies for social media and any social media networks you’ve decided to ditch completely to focus on ones that work better for you?

I’ve tried many ways to market my books; however, due to the lack of funds I have to stick to ‘free’ advertising sites, Facebook pages and groups, Twitter and all the usual social media, some interviews, a radio talk and some positive reviews. I have two freebies, The Star Realm and Weird: A Henry Ian Darling Oddity: Missive One and all my books are at bargain prices. There have been a number of debates regarding prices, some say charge more because people are more likely to think it’s a ‘better’ book, while others price at the minimum and can secure many sales. I’ve no idea what works because I read hundreds of books, some of which are awful and I’m astounded they are doing well, while others are excellent and are nowhere near successful.

I don’t think it’s a good idea to focus on marketing my books during conversations – it feels rude to me. I have joined various book and review groups where it’s expected to post links etc.; though I haven’t found my sales soaring. I’ve accepted (I think for the most part) that I’m not going to be financially successful, although that hope still lingers.

Being self-published has its stigma, though I am as professional as I can be regarding writing, editing, proofreading, designing my covers and so on because my work is important to me and I want to deliver quality. I have to do everything since I don’t have the funds for anything.

I am pleased with my work, maybe that’s as far as it will go? The feedback has been mostly positive.

To answer the question – nothing seems to work for me.

Who would you say are your three favourite authors, and why?

Well that’s trying to point out a favourite child! If I must choose only three:

Dean Koontz because his stories intrigue me – they are mysterious, sometimes fantasy(ish) and meaningful. The series Odd Thomas is one of his best. His books have great characters, wonderful descriptions; funny dialogue in places and the plot is always twisty. Not least is that there’s usually some hope left at the end, unlike Stephen King whose books can be depressing, although I do like some of his work, especially Insomnia and The Stand.

John Wyndham’s stories are scary due to the fact that they could happen. The Chrysalids was my favourite story of his, as it tackled the ‘dangers’ of difference. It was cleverly done.

J. K. Rowling – only because I enjoyed the Harry Potter series so much; I don’t like the other work she’s done. I’m not sure I like her as a person either, but that’s beside the point. The Harry Potter story captured my imagination instantly; the first book was chock full of magical inference and imagination. Although the story became darker, it was still crammed with wisdom and decency and how we must fight evil. There were many important lessons. So really, she isn’t a favourite author, except for HP.

I will say that I choose numerous books from the independent pool of writers; it not only helps others, it gives me a wide range of topics and ‘different’ stances, unlike the formulaic traditionally published.

Do you prefer music or silence when you're (a) writing, and (b) reading?

Most definitely silence in both instances. I need to concentrate and any outside influences are annoying.

How easy do you find it to come up with titles for your books? Is it something you spend a lot of time thinking about?

Usually, the title comes easily, like the idea. Some come in dreams.

Are there any new writing projects on the horizon for you? Any works in progress due to be released?

I’m not writing at the moment, but perhaps I will in the future? I do have a short story to publish nearer to Christmas this year. It’s one that I wrote a while ago and was part of an anthology with other authors, published by Paper Gold Publishing. I’ve done a few stories with them. But now it’s not for sale, I’m able to publish mine as a short – obviously Christmas themed but with a twist. It’s called Ghosts of the Past.

All my books are available as Kindle editions, some are paperbacks (Lulu) and some are audiobooks (Audible).

So that’s it! Thank you very much, Simon, for allowing me to be part of your world for a while. I must say, I love your work – plug – yes, folks, you’ll love them.

Thank you, all, for taking the time to read this interview. 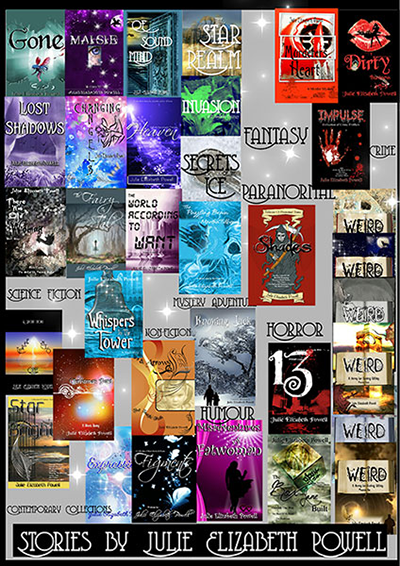